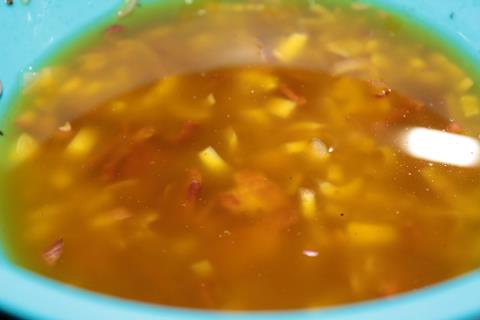 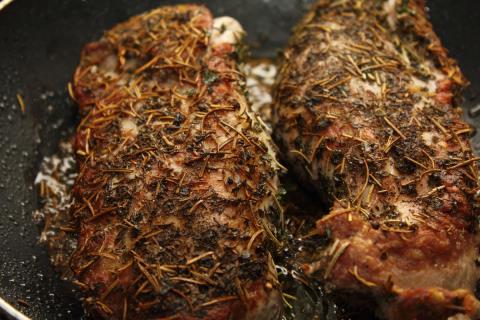 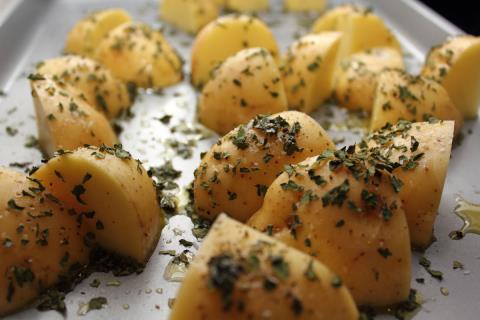 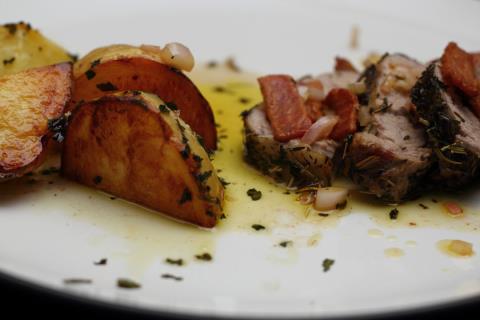 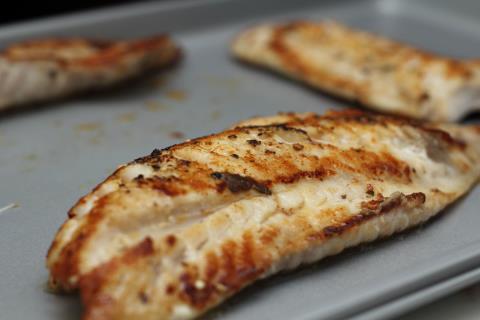 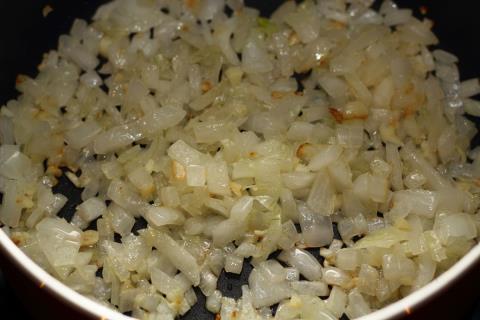 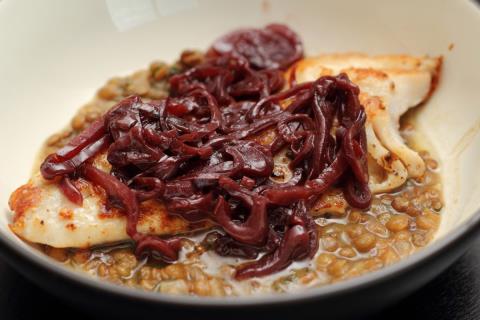 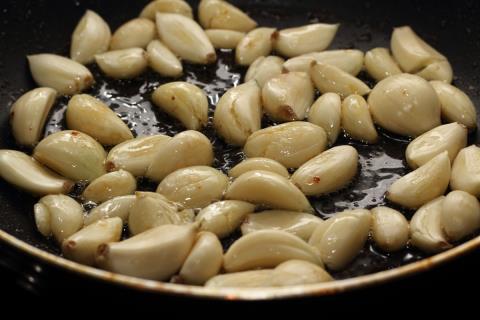 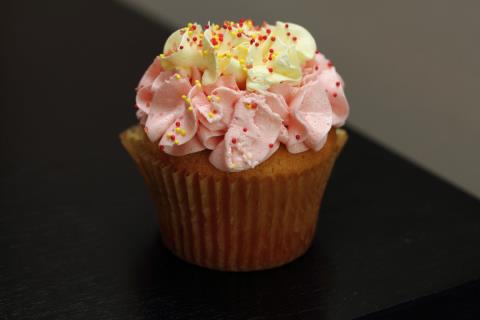 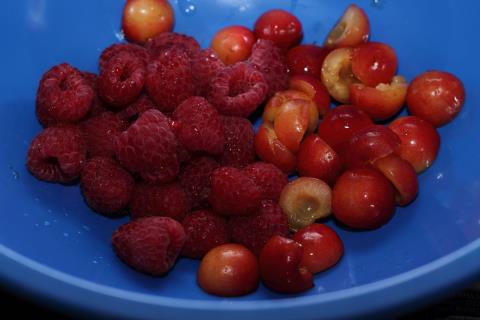 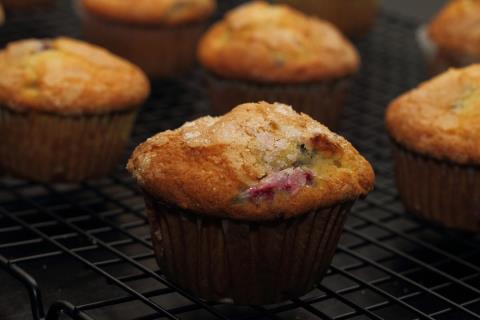 [Since I failed to write a cooking post last week, this one will cover two weeks' worth of projects. Again, remember to click on the images to see larger versions]

The first meal I made was herb-crusted pork tenderloin with roasted potatoes and a bacon-sherry vinaigrette. Pork doesn't feature very heavily in the meals I make, but it might show up more frequently after this dish.

Much of the flavor comes from the bacon-sherry vinaigrette. Sometimes when recipes don't have pictures for each part of the dish, I start losing confidence that I'm making it right. Hopefully this looks like julienned bacon with shallots, sherry wine vinegar and olive oil.

The next task was to sear the pork tenderloins before finishing them in the oven. I coated them with rosemary, thyme and parsley.

Meanwhile, I prepared the potatoes. I rubbed the quartered Yukon gold potatoes with olive oil, then seasoned with salt and pepper.

After the potatoes and tenderloin roasted in the oven for about 20 minutes, it was time to slice the tenderloin and plate them both, topped by the vinaigrette.

This turned out to be one of the best things I've cooked since I moved to Seattle. The vinaigrette was a perfect match for the potatoes and pork, adding a rich and slightly tangy flavor. I ended up having to put the potatoes in for an extra ten minutes since the ones I used were larger than the recipe called for. After that extra time, they turned out perfect though. The pork turned out well too, but really benefited from the vinaigrette flavor. A great dish overall, likely a new favorite.

The next day, I decided to cook up two meals so that I'd have lots of freezable dinners to reheat during the week. I went shopping in Pike Place Market to pick up fresh snapper to pan sear (though I somehow ended up buying much more than that). To go with the fish, I also made lentils and a red wine-shallot sauce.

I seasoned the snapper with salt and pepper, then seared it for about 7 minutes. It ended up perfectly cooked - a slight crust, but very moist inside. However, I should have removed the bones before cooking, as it was much more difficult after it was cooked.

The lentils and red-wine shallot sauce deserve less space however. I discovered that lentils are not among my favorite legumes, even though they were cooked with browned garlic and onion (which provide one of the best scents in cooking):

Personally, I found the shallots a bit unappealing once they had simmered with the red wine and port to make the sauce. I may have cut the shallots incorrectly or used too many. Subsequent servings featured the sauce less prominently.

After cooking the snapper, I started on chicken with verjus and garlic cloves. This was a pretty simple baked chicken breast with a strong sauce featuring lots of garlic. The sauce also made use of verjus, an acidic French liquid sometimes used instead of vinegar.

The recipe made use of many cloves of garlic, which are apparently eaten in between bites of chicken.

The garlic went in with verjus and simmered for 15 minutes while the chicken was sautéed for 5 minutes, then baked to finish cooking. A very simple recipe to follow.

I don't have a picture of the plated meal, since I immediately put individual portions in the freezer. This did not turn out to be a terrific dish, as I found the sauce much too strong. Eating the garlic cloves proved to be unappetizing and I didn't enjoy the strong sweet and sour combination from the verjus. Not a recipe I would make again.

Luckily, I had picked up a few cupcakes while out shopping, so the meal was saved.

Finally, I also made raspberry-cherry muffins. Originally intended to be raspberry muffins, they were enhanced with fresh Rainier cherries when I ate too many raspberries in a moment of weakness. To keep the muffins from having huge chunks of fruit, I cut the cherries in half before mixing them into the batter.

Other than that, I followed a straightforward muffin recipe, with flour, sugar, egg, baking powder, butter, egg, vanilla extract and a pinch of salt. The muffins turned out great and went perfectly with some raspberry tea that I bought at the Uwajimaya Asian market in Seattle (which seems to indicate that I've become completely domesticated).